The Incoherent Position of Bishop Schneider 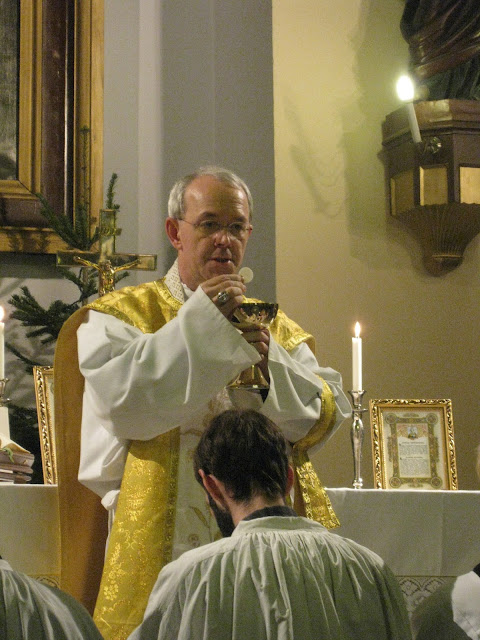 The following is an excerpt from a recent interview of Bishop Athanasius Schneider contained in the December 10 issue of the French periodical, “Présent.”

It was provided to Le forum Catholique by Jacques Regis du Cray (alias “Ennemond,” alias “Come du Previgny”), a former GREC collaborator, unofficial lay-spokesman, and internet monitor for the SSPX in the French speaking world, who first became known to most English-language readers through Fr. Rioult’s book “The Impossible Reconciliation,” in which the latter described him as the “unofficial mouthpiece of Fr. Lorans” (i.e., Former SSPX Communications Director, since replaced by Fr. Arnaud Rostand), who incidentally was another GREC collaborator.

Subsequently, the excerpt was posted by Non Possumus here: http://nonpossumus-vcr.blogspot.com/2016/12/el-obispo-liberal-schneider-nuevamente.html
As Non Possumus points out, Bishop Schneider sounds very much like Bishop Fellay.
After the interview excerpt, we will offer some thoughts on the matter.

Question: The sovereign pontiff prorogued the possibility of confessing for the priests of the Society of St. Pius X beyond the Year of Mercy. Do you think this is an important decision? .

Bishop Schneider: Yes, of course, and I am very happy! This is a very pastoral action, very merciful, in my opinion one of the most important gestures of the pontificate of Pope Francis, which helps the process of canonical integration of this ecclesial reality that has existed for 50 years and which bears evident spiritual fruits. Many young families gathered around the Fraternity of St. Pius X love the Church, pray for the Pope, as their ancestors did before them. The Church contains various houses, various spiritualities. Only ecclesiastics hostile to the Fraternity presented him with exaggerated demands. John XXIII as Paul VI have always insisted on the pastoral of the Council. If the Fraternity has difficulty responding to certain documents of Vatican II, it will fail to fulfill the context of the pastoral purpose of the Council. The dogma has not changed. We have the same was. There is therefore no problem for a canonical of the Society of St. Pius X.


Question: You were one of the men of the Church sent to the Vatican to visit the seminaries and prioresses of the Fraternity. What solution do you think possible to its controversial position?

Bishop Schneider: The personal prelature is a threefold position adapted to the reality of the Fraternity of St. Pius X and to its mission. I am convinced that Archbishop Lefebvre would have willingly accepted with gratitude this official ecclesial structure, recognition by the Church of the apostolate led. What would be done justice, well belatedly, to the unjust suppression of the Fraternity in 1975 by the Holy See. At that time, Archbishop Lefebvre presented a recourse. The erection of a prelature would somehow luck accept the canonical recourse of Bishop Lefebvre with a delay of 40 years. On the other hand, the Fraternity must not demand 100% guarantees, which remains unrealistic: we are on earth, not in Heaven! It will be a gesture that would betray some lack of confidence in Providence.


1) It is difficult to say where or why Bishop Schneider continues to claim that certain documents of Vatican II are negotiable in the SSPX ralliement process, when he has been explicitly contradicted by Cardinal Muller (Prefect for the Congregation for the Doctrine of the Faith), who outranks him, and who says the whole Council must be accepted.

Moreover, it is even more difficult to understand how Bishop Schneider can make this claim in the face of the Apostolic Brief  ‘In Spiritu Sancto,‘ which was read at the closing ceremonies by Archbishop Pericle Felici  (General Secretary of the Council), which officially closed the Council on December 8, 1965, and which contains this admonition:

“At last all which regards the holy ecumenical council has, with the help of God, been accomplished and all the constitutions, decrees, declarations and votes have been approved by the deliberation of the synod and promulgated by us. Therefore we decided to close for all intents and purposes, with our apostolic authority, this same ecumenical council called by our predecessor, Pope John XXIII, which opened October 11, 1962, and which was continued by us after his death.
We decided moreover that all that has been established synodally is to be religiously observed by all the faithful, for the glory of God and the dignity of the Church and for the tranquillity and peace of all men. We have approved and established these things, decreeing that the present letters are and remain stable and valid, and are to have legal effectiveness, so that they be disseminated and obtain full and complete effect, and so that they may be fully convalidated by those whom they concern or may concern now and in the future; and so that, as it be judged and described, all efforts contrary to these things by whomever or whatever authority, knowingly or in ignorance be invalid and worthless from now on.
Given in Rome at St. Peter’s, under the [seal of the] ring of the fisherman, Dec. 8, on the feast of the Immaculate Conception of the Blessed Virgin Mary, the year 1965, the third year of our pontificate.”
http://www.papalencyclicals.net/Paul06/p6closin.htm
Quite obviously, Bishop Schneider’s theory is condemned by the very Apostolic Brief which closed the Council itself!
One would think Bishop Fellay would have made this objection of his own accord to Bishop Schneider.
Perhaps Bishop Fellay chooses to ignore the Apostolic Brief as inconvenient, while Bishop Schneider’s soma is just what the accordistas want to hear.
But it ought to serve as a blatant red flag to those still on the fence, that any solution based on Bishop Schneider’s theory is setting them up for disaster (i.e., a convenient remembrance of the Apostolic Brief after the fact).
Besides, those who do not learn from history are doomed to repeat it: We all know from Michael Davies how the modernists emphasized the pastoral nature of the conciliar documents in order to gain support for them, only to insist on their binding nature after the fact.
The same thing is happening here, which is quite obvious for all those who have eyes to see.
2)  Bishop Schneider’s second comment (i.e., That he is convinced that Archbishop Lefebvre would have signed the deal on the table) is nothing short of ridiculous: The Archbishop claimed exactly the opposite after the consecrations: The details of the deal were now besides the point.  What was required was the reversion of Rome back to the teachings of their predecessors.  Without that, no deal.
Just think about it: Your modernist enemy in Rome is trying to convince you that Archbishop Lefebvre would have signed the deal…so you should BELIEVE him?!
Your instinctive reaction should be to run in the opposite direction.  Cardinal Canizares’ own secretary warned the SSPX not to accept any deal, as Rome would not be able to honor it.
But Bishop Fellay didn’t want to hear about that in Albano in 2011, and doesn’t want to hear about it today in 2016: He told the whole world “It is not a trap” during his August Australian “Capitulation Conference.”
What can one do but pray for such a one?
Bishop Schneider’s final paragraph reads very much like a summary of Fr. Gregoire Celier’s poisonous and cunning arguments from his 2008 book “Benedict XVI and the Traditionalists,” hints of which also come through in Bishop Fellay’s “Letter to the Three Bishops.”

[Incidentally, Fr. Gregoire Celier admits to having delivered a conference/address to the GREC.  Do you see the pattern here?]
It appears to be the blueprint they are banking on: We must have courage; we must have justice; we must have faith; we must be realistic (because we really don’t have faith), etc.

Guarantees?  We don’t need no stinking guarantees!  We have (ahem) faith!
But can anyone find those ideas and sentiments in post-1988 Archbishop Lefebvre?
No (and the fact that the likes of Fr. Simoulin, et al exhort us not to be 1988ers anymore proves the point: The current orientation reigning in Menzingen is contradicted by that of Archbishop Lefebvre after the consecrations.  Period.).
And being lulled to sleep and suckered by the principles of GREC (and their partisans) today will sound the death knell of the SSPX.