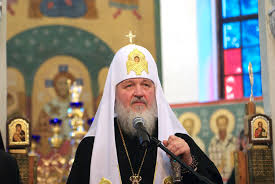 [The following story appears on SSPX.org; our commentary follows]

New Russian Orthodox Church in Paris
December 05, 2016
District of the US

The head of the Russian Orthodox Church, Patriarch Kirill, consecrated a new church in Paris, just yards away from the Eiffel Tower.

On Sunday, December 4, Holy Trinity Church was opened as part of a Russian cultural and spiritual center, a 100 million euro ($106 million) complex owned by the Russian government on the banks of the Seine River in the French capital.
Around 500 Orthodox believers from the Russian community in Paris, including the offspring of Russia’s former princely houses, packed the church for the event.
Patriarch Kirill handed over a copy of one of Russian Orthodoxy’s most revered icons—the Iveron Icon of the Mother of God—to the church. All those present at the ceremony were given small icons of the Holy Trinity. Kirill thanked France for its hospitality to the Russian immigrants who arrived in the country after the 1917 Soviet Revolution, and for allowing the construction of the “magnificent” Paris site. In meetings with Russian emigres, the Patriarch warned that it’s “dangerous” for them to lose their loyalty to Russia. Kirill called the new church a symbol of the close ties between the peoples and the cultures of Russia and France.
[The new church] is a monument to our close relations in the past and, certainly, a symbol of what awaits us in the future,” he said. He urged Russians living abroad to “consider themselves members of the Church and to go to church . . . and by no means allow their children to lose their language and culture.” According to Russian news agencies, Patriarch Kirill added, “It’s your duty. You can live wherever you want, but you can’t break spiritual and cultural ties with your people.” Construction of Holy Trinity Church began last April on a plot of land purchased earlier by the Russian Government. The church’s five domes were completed in nine months. The covering for the domes consists of 90,000 golden leaves measuring eight by eight centimeters. The total area of the building is 4.6 thousand square meters
The question about the possibility of creating an Orthodox center in Paris was raised by the late Russian Orthodox Patriarch Alexy II, who visited France in October 2007. The old St. Nicholas church, on the street of the Loops, is too small and could not accommodate the numbers expected to turn out for such an event. Russian President Vladimir Putin championed the project, which prompted criticism from liberal rights groups when it was first approved in 2008. Additional concerns were raised as diplomatic relations between France and Russia soured in the ensuing years. Moreover, Putin played down suspicions that it would be used by the Russian secret services to spy on sensitive government buildings and embassies in the surrounding neighborhood.
The Russian state-owned church, on a prominent piece of Parisian real estate, is also an awkward symbol for secular France, which adheres firmly to its division between church and state. In Russia—until 25 years ago an officially atheist state—the role of the Orthodox Church has grown under Putin, notably in its lobbying for traditional family policies and against homosexuality.
President Putin was expected to attend the opening ceremony with his French counterpart, Francois Hollande, in October, but his visit was cancelled after the French side shortened the program for his trip amid increasing tensions between Russia and France over Moscow’s veto of a French United Nations Security Council draft resolution on Syria.
Patriarch Kirill will visit Sainte-Genevieve-des-Bois Cemetery where a large number of people of Russian descent, including many so-called White Russians (i.e., anti-communist Russians who fought in the Russian Civil War) and those belonging to later waves of immigration, are buried. Kirill will also travel to Zurich, Switzerland to take part in celebrations commemorating the 80th anniversary of the local Orthodox cathedral there during his five-day trip to Europe from December 3 to 7.
____________
Commentary:
1) The word “Catholic” does not appear in the story;
2) Any reference to the need for the schismatics to convert to the one true Church in order to be saved does not appear in the story;
3) The relevance of this story to Catholic Tradition is not explained;
4) The dogma of papal primacy is not mentioned in this story;
5)  Certainly, no condemnation of false ecumenism is mentioned in this story.
The question begs itself: What is the purpose of posting this irrelevant story?
Well, it is quite obvious the effect the article is supposed to have upon the reader is to instill happiness for the Orthodox, that they are getting a beautiful church.
More importantly, one must be permitted to wonder whether, amid the present climate of ralliement, the article was meant to send a signal to Rome: We are slowly moving towards ecumenism!
“Of course, we have to be careful about how we do it, or those damn Resistance big mouths will go writing about it.”
Consequently, the story is careful to reach the desired effect, without ever endorsing ecumenism.
“What are you talking about?  We didn’t endorse ecumenism in that article!“
And yet, the effect of instilling joy in the hearts of the anesthetized pew sitters will not be limited to them alone: The Orthodox and Rome will also be quite happy to see such an article as this, and the effect of it (for the Orthodox) will be to have reinforced them in their schisms.
“Even the SSPX didn’t say we needed to convert.”
And after all, didn’t Michael Davies say (erroneously) that the Orthodox possess “formal apostolicity,” and constitute “true particular churches?”
Well, this article certainly fits nicely into the greater context of SSPX compromise in pursuit of Roman approval, when one considers all the other acts of Tradcumenism over the last several years (in contradiction to their former condemnation of such).
What is notable here is that the ecumenical impulse (which always grows like an infection within those who flirt with Rome too much) has been expanded to include non-Catholics.
They will deny it, of course; they will say it is making a mountain out of a molehill; almost certainly there was a preconceived excuse ready to explain and rebut whatever Resistance writer noted the aberration.
Go back to the purpose of the article: You are supposed to be happy for the Orthodox.
One can easily imagine all the pats on the head of the good puppy, turning to its masters for approval.
An article which might pass for “news” in a secular paper or website is scandalous appearing on an SSPX website (particularly so, within a context of rapprochement and compromise in pursuit of a practical accord).
As a writer said to me:

“I had read that article a few days ago on the sspx site and I got to the end not knowing if it was supposed to be a good thing, or a bad thing, that the Russian Orthodox have a new church in Paris. There is nothing in the article that would let one know either way.”

But that is precisely the method: Incrementally shifting from opposition, to the indifference manifestd in this article, and eventually to promotion of ecumenism.

Baby steps and paper cuts all piling up to create a very different SSPX (One that Rome can love).
It will all soon be forgotten; go back to sleep.
print
Next Post
Previous Post