Lessons from the Gulag Archipelago 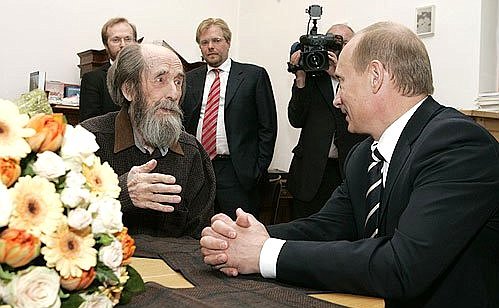 Alexsandr Solzhenitsyn meets with Vladimir Putin in 2007
In 2000, Dr. David Allen White delivered an outstanding literature seminar at St. Thomas Aquinas seminary (SSPX) in Winona, MN on the subject of Aleksandr Solzhenitsyn, in four parts.  The seminar begins by asking a rhetorical question (paraphrasing generally): “Why should Catholic seminarians bother to learn about Solzhenitsyn, whose field was literature and history, and who was not even Catholic?”
Similar questions are sometimes offered by the opponents of Bishop Williamson, who in contemporary times, ridicule the bishop for organizing literature conferences (e.g., The Dickens conference in Broadstairs comes readily to mind) along the same lines.
“He should be busy bishoping, not conducting literature seminars while the Resistance languishes!”
Perhaps without realizing it, these naysayers are actually ridiculing the SSPX’s insertion of the year of humanities into the seminary curriculum, which certainly desired to provide a natural basis upon which to build a philosophical and theological formation.
The fact is that the great works of literature teach moral and philosophical lessons, often illustrating the practical application of the virtues: It is one thing to read Josef Pieper’s treatise on the cardinal virtues, but quite another to read real life examples of men and women putting those virtues into practice.
Solzhenitsyn’s “Gulag Archipelago,” which recounts both the historical reality of the Soviet prison system, and the moral lessons the author learned while interned therein, represents for many Catholic scholars the high-water mark in 20th century literary achievement.
According to Dr. White, the Gulag Archipelago is:
“The great work of the 20th century.  If the Greeks had Homer; if the Romans had Virgil; if the Middle Ages had Dante; if the Renaissance had Shakespeare; then our century, our time has had Solzhenitsyn, and his great work is the Gulag Archipelago, because it is a work that defines everything about this [20th] century: Totalitarianism, brutality, murder, horror, and the triumph of the human spirit, and the fact that God is watching over all of it.”
How do these lessons come through in a way meaningful and relevant to Catholics of Tradition?
Dr. White distills the primary lessons of Solzhenitsyn into these three:
1) “There is truth.  We can know it.  And when we know it, we must put it forward, whatever the cost.
2) “We must be courageous in standing up and fighting for the truth.  The world will try to shout us down.  The world will try to destroy us all the more as we try to put the truth forward.  To put the truth forward in the world at any time demands courage; to put it forward in the modern world; in the world we find ourselves in today, demands superhuman courage; it demands the grace of God.
3) “We will not be worthy of God’s grace unless we suffer.  And through that suffering will come health of soul, a better understanding of the truth, and the courage to stand up for it in the world, no matter what the barbarians try to do to us.”
What lessons could be more relevant to a Resistance movement trying to survive and grow amidst the worldwide prison planet, and universal apostasy?
Solzhenitsyn ends his chapter “Barbed Wire and the Soul” with these amazing words quoted by Dr. White:
“Bless you prison, for having been in my life.”
As Dr. White explains, this was Solzhenitsyn’s recognition that, without suffering, he never would have understood the truths just recounted.
Many of us Resisters endlessly profess our fidelity to the truth, but don’t want to hear the first thing about the lessons on truth which can be distilled from Shakespeare, Dante, Solzhenitsyn, Dickens, etc.
Yet, as someone once said, “Docility to the truth is the first precondition for communion with it.”  How can we honestly profess our fidelity to truth, when we refuse even to expose ourselves to the presentation of it?
The old SSPX’s institution of the year of humanities into the seminary curriculum demonstrates quite clearly that they never considered dogmatic manuals to be the only acceptable presentation of truth (though they are certainly the refined and ultimate presentation of it!).
No doubt, many wrongfully precluded the usefulness of literature seminars a priori because they did not understand these conferences were ordered toward a contextual presentation of truth.
Now that you know otherwise, and understand their relevance and utility, I hope you will not cheat yourself from grabbing the lessons they have to offer.

The great literary works did not achieve their greatness because they were entertaining.  What makes them great is their depth of psychological insight into the human condition, and the universal and perennial truths gleaned therefrom.
All of these conferences are available at https://stmarcelinitiative.com/.
The 1st of the 4-disk seminar on Solzhenitsyn can be purchased here: Solzhenitsyn (the others are available on the same website).
print
Next Post
Previous Post