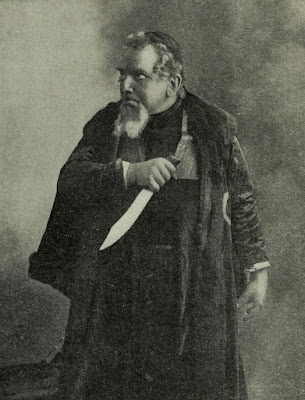 Shylock the Jew in Shakespeare’s “The Merchant of Venice”

[Those who have read Shakespeare’s “The Merchant of Venice,” will understand that “all that glisters is not gold.”  One of the three plots in the play is that of the “bond:” Shylock (the Jewish merchant) has made a loan to his competitor, Antonio (who has given his heart as collateral).  Upon receiving word that his competitor must default, Shylock refuses to allow others to repay him even ten times the amount owed, and all pleas for mercy fall on deaf ears.  “An oath, an oath, I have an oath in heaven!”  Insisting on justice (i.e., cutting Antonio’s heart out), Shylock desires to eliminate his business competitor, so that he may make greater profits, and the letter of the law is certainly on his side (or so he thinks).
As Shylock receives the knife, and is about to cut Antonio’s heart out, the judge pauses him for a moment, to remind Shylock that in justice he is only to receive the heart, not any of the blood contained therein! Moreover, the attempt to take the heart, which must necessarily take the blood, is judged attempted murder. The sentence is to deprive Shylock of that which he covets most (i.e., his money), and to compel his conversion to Christianity.  The picture above nicely depicts Old Testament justice (“an eye for an eye”), as contrasted with New Testament mercy.
Shakespeare’s lesson is clearly this: Those who insist on justice and preclude mercy are fools, and run the risk of getting much more than they bargained for in the administration of justice.
However, unlike Shakespeare’s Shylock (a case in which the full measure of justice received by Shylock was not foreseeable), Bishop Fellay’s demand of “justice” for the SSPX is made with the consequeces in relatively clear view:

A trap for the capture, containment, dilution, and stifling of Tradition.  Bishop Fellay need only look down at the dead bodies he must step over as he walks the same path of the other rallied communities into Rome.
As the Jew had a very short sighted comprehension of justice in “The Merchant of Venice,” so too does our anonymous friend point out Bishop Fellay’s seeming incomprehension of the same.
Please also note that we have now linked to the Psalm129 blog in the left-hand Blog List column, in light of its consistently good articles.]

The SSPX is convinced that they are owed, as a matter of justice, a “canonical regularization” from Modernist Rome. The claim is that such a move would rectify the “unjust suppression” of the Society in the 1970s.
The argument itself is relatively new. In the past, Archbishop Lefebvre and the rest of the SSPX superiors considered it a “mark of honor” to be “excommunicated” from the Conciliar Church. He also said that unless the Romans accepted Quanta Cura, Quas Primas, and the rest of Tradition, then it is “useless” to dialogue. Justice, the Archbishop believed, was when Rome would turn from its heretical ways and embrace the faith of all time.
The Society of old took its cues from these principles. Throughout the 90s and 2000s, as other traditionalists slid into the hands of the Romans, the SSPX stood strong and essentially characterized these groups as traitors. The Society would also put scare quotes around the word “regularization” whenever the topic came up (something they no longer do today). When Campos fell in 2002, Bishop Fellay warned them they were being put into “an ecumenical zoo.” “The irregularity lies not with the SSPX but with the Conciliar Church,” was another commonly heard claim.
Over the past five years, the “justice” argument has taken center stage and has swept all others aside. It is regurgitated throughout the Traditional echo chamber ad nauseam. Bloggers of all stripes – many who do not attend Society chapels – join in the chorus. Its most recent victim is Bishop Athanasius Schneider of Kazakhstan.
In a recent interview with a French Catholic journal, Schneider boldly claims that the Archbishop, were he alive today, would accept a personal prelature. For, a prelature would be part of the “canonical integration” process that would “be restoring justice, very belatedly” to the Society.
Schneider also suggests Pope Francis was being “merciful” in “extending” the faculties of Society priests to hear confession. Playing the role of pragmatist (as all liberals do) he further claims the Society “cannot demand 100% guarantees.” Such demands “would be unrealistic” and “would betray a certain lack of trust in Providence.”
Schneider and the Society (who proudly re-produced the interview on their website under the title “Restoring Justice to SSPX”) are following in the footsteps of the other liberals who went before them. Instead of reminding Rome first and foremost that Catholics the world over have a right in justice to a modernist-free Church, and that the Vicar of Christ has a duty to God (if he wishes to save his soul) to uphold Tradition, they merely focus on the “rights” of Tradition, thereby inverting the point of emphasis completely. Again, the Archbishop’s focus was primarily on getting Rome to see its doctrinal errors and to see that it was not living out the Catholic faith. This is not the primary aim of the SSPX today.
When Christ spoke to the pharisees, he rebuked them: “Whited sepulchers! Brood of vipers!” John the Baptist, in warning Herod of his wicked ways, shouted “repent!” Why is this not the language of the Society in our time? It used to be for many years. Even Bishop Fellay, for instance, publicly referred to Francis as a “genuine modernist” as recently as 2013. But when asked about that comment by Tim Sebastian in 2016 (around the time when talks with the Vatican were heating up) he walked it back. What’s more is that when one visits the Society’s website today, they are met not with essays that shine light on the truth, but many times with news reports about irrelevant non-Traditional topics.
Instead of acting like they are in possession of a great pearl, the Society seems embarrassed by the fact that the Holy Spirit has given them eyes to see the crisis in the Church. Put another way, instead of preaching truth and trusting in God to increase the size of their flock, they have decided to engage in Trad-ecumenism and to seek the approval of “canonically integrated” Bishops like Athanasius Schneider so they can come off as mild-mannered and “acceptable” to the masses.
In opposition to what their Founder said, and in opposition to what their leaders used to say, the neo-SSPX believes it is better to be “on the inside” and to have a “connection” with Rome. They think that by joining with “all trads of goodwill” they’ll be able to stop the rise of progressivism in the Church. This is the raison d’être for embracing the “justice” argument. But the problem with this logic is that it is the wisdom of man (who always thinks in quantity) instead of the wisdom of God (who always thinks in quality). It is quintessential Liberal Catholicism.
The reality is that the Society is a group of some 600 priests in a Church that has 414,000 priests. It is a lifeboat, not a tugboat. It is an illusion, as Archbishop Lefebvre once said,  to think they can “re-enter this Conciliar Church in order, supposedly, to make it Catholic.” It is “not the subjects that make the superiors, but the superiors who make the subjects.”
Let us close with an analogy. Suppose a group of terrorists broke into a palace. Suppose they locked the King in the dungeon while plundering his residence. It would not necessarily be an act of justice to un-lock the dungeon door. Rather, justice would be served when the palace was restored to order and when the terrorists recanted from their ways. May we fervently pray for the day when the modernists who have robbed the Church come back to the truth and enshrine Tradition to its rightful place in Rome. Only then will there be true justice in the Church.

[Postscript: Dr. David Allen White’s 2001 seminary conferences on Shapespeare’s “The Merchant of Venice” are available for purchase at the St. Marcel Initiative website, here: http://stmarcelinitiative.com/bookstore/products/The-Christian-Comedy-of-Shakespeare%27s-The-Merchant-of-Venice-%252d-Part-I.html.  They are outstanding for their Catholic insights, and address such topics as usury; compare/contrast the Catholic and Jewish spirits; Old Testament justice vs New Testament mercy; etc.]