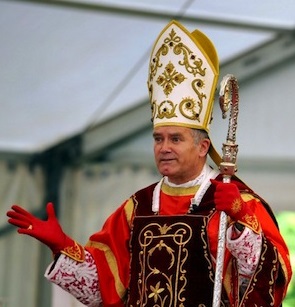 The SSPX and Doctrinal Pluralism (Part I)

By
Sean Johnson
11/17/16
On November 7, the Rorate Coeli blog posted an interview[1]of Bishop Fellay by diocesan priest (Fr. Kevin Cusick, of the Archdiocese of Washington), on the occasion of the blessing of the new SSPX seminary in Dillwyn, Virginia.  Not surprisingly, most of the Resistance commentary centered on this excerpt:

“I asked the bishop if he had good news to share about the status of the personal prelature rumored to be on offer in Rome in order to integrate the Society fully and permanently into the life of the universal Church. The bishop described the current arrangements as “almost ready” and one of “fine tuning”, his demeanor and expression exuding confidence and serenity. When I asked if the situation was one merely for prayer he was very quick to assert that developments in the canonical proceedings had progressed beyond that point. But, he said, “the problem is not there” but with the matter of Vatican II.”[2]

Certainly, this passage is worthy of attention for many reasons:

Regarding these doctrinal considerations, while the Resistance media has focused commentary on the above passage, it seems to have omitted commentary on what I consider the single most significant comment in the interview:

“He said that we must arrive at a point where one can “disagree and still be a Catholic” when it comes to the mentioned points of Vatican II at issue.”[3]

And what are these “mentioned points of Vatican II?

“He went on to elaborate, however, that the documents of Vatican II are at issue, a matter with which many readers are already aware, the remaining sticking points being those documents treating religious liberty, ecumenism and reform of the liturgy.The Society has been very firm and consistent over the years that these teachings are incompatible with the integral tradition of the Church.”[4]

There is some incoherence here, because just after informing Fr. Cusick that the SSPX has always “been very firm and consistent over the years that these teachings are incompatible with the integral tradition of the Church,” Bishop Fellay nevertheless states the need to “arrive at a point where one can ‘disagree and still be Catholic’ when it comes to the mentioned points of Vatican II at issue!”

My friends, they have a name for this willingness to “agree to disagree” on essential matters of the Faith:

Yet doctrinal pluralism is so clearly contrary to the faith, that no Catholic may presume to accept it. Doctrinal pluralism is synonomous with religious indifferentism (which is itself a rejection of the idea of one true Church instituted by God, and membership in which is necessary for salvation).  In presenting itself to the world as a tolerant posture recognizing the (alleged) good in all religions, it is in fact a Masonic artifice derived from the rejection of them all (i.e., naturalism):

If all religions are false, then what principled objection can there be to a co-existence of competing beliefs, (and all the more so within the same confession)?

If it is true that a certain pluralism can exist in matters liturgical (e.g., the different approved rites of the Church) or canonical (e.g., different codes of canon law for the Latins and Orientals), it is absolutely prohibited in the domain of doctrine, in instances where the Church has already spoken to settle the matter (as is the case with regard to the ecumenism and religious liberty mentioned by Bishop Fellay), and for obvious reasons:

Not only would a freedom of opinion in decided matters of doctrine present a rupture of the unity of faith within the universal Church, but it would also represent an implicit attack upon the teaching authority of Peter (and therefore of the dogma of Papal Primacy)!

Of course, Bishop Fellay used to recognize and oppose (at least outwardly, and/or seemingly) this idea of doctrinal pluralism in the Church:

“The authorities see there is a crisis, but they don’t want to use the right means to solve it. We are still here. I might say, we are stuck here! Currently, there is no conviction that tradition is the right way. They see the fruits; they even say the fruits are good! They say the Holy Ghost is there! (Not too bad!) But, they don’t say, “That’s the way to go.” Instead, they say, “Tradition is a way amongst other ways.”
Their perspective is pluralism. Their thinking goes something like this:
Oh, look, if we have progressive people who do silly things as members of the Church, then we should also have a place for those who like tradition – a place in the middle of this circus, of this zoo, a place for dinosaurs and the prehistoric animals
– that’s our place(!) – “But just stay in your zoo cage,” they will train us…”[6]

“I think Rome’s friendliness towards us is because of its ecumenical mentality. It is certainly not because Rome is now saying to us, “Of course, you are right; let’s go.” No, that is not the way Rome thinks about us. The idea they have is another one. The idea is an ecumenical one. It is the idea of pluricity, pluriformity.
Zoo cage Catholicism
To illustrate this ecclesiastical pluralism, I use the analogy of a zoo. Up until the time of the Second Vatican Council, there was only one species of member in the Catholic Church – genuine Catholics. If somebody did not want to be a Catholic, if someone wanted to teach something else than what the Church taught, he was excommunicated. However, if you read the theology books published since the Council, you can almost say and think anything you want and still be in good standing. At the Council itself there was a general will to broaden the limits – the borders – of the Church.”[7]
What a different position Bishop Fellay seems to take in the new interview!

The apparent metamorphosis is all the more striking when one stops to consider that the acceptance of doctrinal pluralism evinces an even greater evolution of position in the SSPX than had it “merely” accepted Benedict XVI’s “hermeneutic of continuity,” because in the latter, one agrees to pretend there is no contradiction, but in the former, one openly recognizes and accepts the existence of doctrinal contradiction (i.e., the acceptability of mutually exclusive doctrines somehow artificially co-existing within the same religion).

But the idea is not only a violation and attack upon the unity of the Church (which must always be united in the one true faith), but even an attack upon sound reason, in violation of the principle of non-contradiction (i.e., Two contradictory statements cannot both be true at the same time and in the same sense).

Taken to its logical conclusion, violation of this principle would imply the entire world could be incorporated into the Catholic Church without any doctrinal conversion:

If the necessity and unity of faith is replaced by doctrinal pluralism, then what keeps the Pope from recognizing the Dalai Llama as “Catholic,” if all that is truly required is legal recognition?

In fact, Bishop Fellay acknowledged this consequence of doctrinal pluralism for the Church in the same interview just cited, when he observed:

“This idea of broadening the Church’s borders, of putting everybody in, allows Cardinal Kasper to say what he said in L’Osservatore Romano: “The Orthodox, as they have all the means of salvation, do not need to convert.” He says it black on white. You have others like Mother Teresa, who said that the important thing for a Buddhist is to be a good Buddhist. Okay, so be a good Buddhist, or a good Hindu, or a good Muslim, and everybody goes to heaven.”[8]

And how did Bishop Fellay react to Rome’s plan to carve out a cage for the SSPX in the pluralist zoo?

“But if this is the new concept of the Church, then why not grant a little cage to the dinosaurs? If you already have all the birds and all kinds of animals, why not have a little place for the “fossils” which they think us to be? There is a condition, though: the dinosaurs have to stay in their cage. Imagine crocodiles or dinosaurs all over the zoo! Never!…So we come to them and we say, “Well, we are sorry, but there is no zoo.” The Catholic Church is not a zoo. This comparison may show you how deep is the difference of vision.”[9]

Yet 12 years later, Bishop Fellay can openly declare (apparently without adverse reaction from his clergy or parishioners?) that:

“He said that we must arrive at a point where one can “disagree and still be a Catholic” when it comes to the mentioned points of Vatican II [religious liberty, ecumenism, liturgical reform] at issue.”

That statement would appear to be a complete contradiction of his previous position, and a wholly unacceptable position for any Catholic to profess.

How does one account for such an apparent evolution in the Superior General?

One possibility is that there really never was any true evolution at all; that while the rank and file SSPX clergy and laity were led to understand Bishop Fellay as being opposed to a juridical recognition before Rome converted back to the Faith (among other reasons, because of the problem of doctrinal pluralism), the bishop himself planted little “time-bombs” in these conferences, which would later allow him to head in a direction other than the common understanding he was imparting to the world (yet another interesting parallel between the crisis in the SSPX and that within the Church after Vatican II).

It will be the object of “Part II” of this article to expose these “time-bombs,” and conclude that, if we are to study Bishop Fellay’s words carefully, and take them at their face value, we will arrive at the conclusion that it is very possible Bishop Fellay never really opposed doctrinal pluralism as an obstacle to juridical recognition to begin with.
[1]http://rorate-caeli.blogspot.com/2016/11/sspx-exclusive-bp-fellay-speaks-to.html
[2]Ibid.
[3]Ibid.
[4]Ibid.
[5]Ephesians 4: 5
[6]http://www.angelusonline.org/index.php?section=articles&subsection=show_article&article_id=2185
[7]http://archives.sspx.org/sspx_and_rome/what_catholics_need_to_know.htm
[8]Ibid.
[9]Ibid.
Next Post
Previous Post