But Didn’t Fr. Pulvermacher Say the New Mass Was Not Grace-Giving (Part II)? 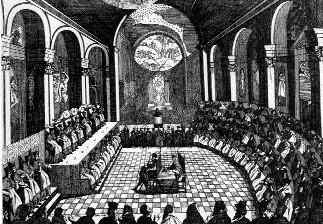 Objection: Yes, but the following month, Fr. Pulvermacher did give reasons and examples of cases in which valid sacraments would not produce or impart grace.
Response:

In response to complaints and accusations of heresy for having made the statement that “the new Mass is not grace-giving,” Fr. Pulvermacher dug his heels in, and offered the following reply:
“First of all, there is a difference between validity and grace-giving. I believe the one may be present without the other. Surely, I do not claim that in every case the New Mass is invalid. I hate to make comparisons but I know you would agree that a valid Satanic mass (Black Mass) would not be grace giving. I certainly do not hold the New Mass is the same as a Black Mass. I merely look at the fruits. So far I have not seen a Catholic who has advanced in holiness because of the graces of the New Mass. No Novus Ordo priest or lay person that I know of has even come close to being lifted to the honors of the Altar—sainthood. Of course, you might say that 15 or 20 years is not enough time to tell. However, we can look at the miserable condition of the papacy, the episcopacy, the priesthood, the brotherhood and sisterhood, and the laity—single and married—and we find it easier to say “no grace giving,” than “grace giving.” We have material eyes and cannot see the state of grace, so we cannot prove it one way or the other. All we can do is to look at the results of the New Mass. Has anyone ever dreamed that in most of our churches such sacrilegious things could take place as clown liturgies, dancing girls, homosexual masses, Jewish and Protestant liturgies? Our Lord said, “Let no one lead you astray.” “By their fruits you shall know them.” “Beware of false prophets who come to you in sheep’s clothing, but inwardly are ravenous wolves.” I have yet to see a single Catholic who has truly benefitted from the New Mass. Never have I seen a novus ordo convent or a monastery where religious life was not in a state of decline. When we had the true Mass, normal progress was seen. When we adopted the Novus Ordo, we have seen normal decline. I dare any person—cleric or lay—to prove the grace-givingness of the New Ordo liturgy!”[i]
What are we to think of this response?
The first thing that stands out, is that the reasons adduced in support of Fr. Pulvermacher’s conclusion are anecdotal, analogical, and circumstantial, but not theological.
That is to say, his conclusion that the new Mass is not “grace-giving” is based on his personal experiences (anecdotal), a comparison to the Black Mass (analogical), and the general condition of the Church today (circumstantial).
In other words, Fr. Pulvermacher has arrived at his position, not on the basis of sacramental theology, but on the basis of arguments deduced from reason, and he ends his reply with this challenge:
“I dare any person—cleric or lay—to prove the grace-givingness of the New Ordo liturgy!”
32 years after the fact, this is precisely what I will set out to prove.
In the course of doing so, as was pointed out in the Introduction to the Catechetical Refutation,[ii]it ought to be constantly borne in mind that the arguments which follow are in no sense to be interpreted as a defense of the Novus Ordo, or attendance at it (which is objectively evil).
We consider here only the issue of whether or not the transmission of sanctifying grace can occur at a valid Novus Ordo Mass (which would in turn justify the comment made by Bishop Williamson that in certain circumstances, spiritual nourishment can be found there).
The Council of Trent:
As was pointed out in the previous post, the Council of Trent (Session 7) declared:
“CANON VI.-If any one saith, that the sacraments of the New Law do not contain the grace which they signify; or, that they do not confer that grace on those who do not place an obstacle thereunto; as though they were merely outward signs of grace or justice received through faith, and certain marks of the Christian profession, whereby believers are distinguished amongst men from unbelievers; let him be anathema.
CANON VII.-If any one saith, that grace, as far as God’s part is concerned, is not given through the said sacraments, always, and to all men, even though they receive them rightly, but (only) sometimes, and to some persons; let him be anathema.
CANON VIII.-If any one saith, that by the said sacraments of the New Law grace is not conferred through the act performed, but that faith alone in the divine promise suffices for the obtaining of grace; let him be anathema.[iii]

These three Canons provided the framework for the further development of sacramental theology in the Catholic Church, and definitively declared, against the Protestant errors, how sanctifying grace works through the sacraments, primarily through the codification of two principles:

1.       Ex opere operato: Translated as “from the work [or rite] performed.”
According to Msgr. Pohle:
“All the sacraments, as acts of their invisible author and chief minister, Jesus Christ, by virtue of their immanent dignity, move God to the (physical) production of grace…”[iv]
This means that, so long as form, matter, and intention suffice to produce a valid sacrament, grace (per both Trent, and the manuals which have taken their cue from Trent) is present.
Nor could it be otherwise, for as the manuals assert:
“Because if they did not produce it [grace], they would be sterile.  Now this is contrary to the truth of faith that ‘the sacraments confer grace on those who put no obstacle thereto (Council of Trent, Sess VII, Can. 6).’”[v]
The contention that there could ever be such a thing as a sterile sacrament has been definitively precluded, and to assert it is proximate to heresy in light of Canon VI, for as yet another manual explains:
“The grace of the Sacraments is infallibly produced in those who are capable and fit recipients, by reason of the sacred rite itself (ex opere operato)…In other words, the sacramental rite produces grace in virtue of this institution of Christ…”[vi]
In short, all approved theologians since at least the time of Trent utterly preclude as heretical the contention that there could ever be such a thing as graceless sacraments.
2.       Ex opere operantis: Translated as “from the work of the doer.”
The term “refers to the role and value of the recipient’s or minister’s moral condition in causing or receiving sacramental grace.”[vii]  As Msgr. Pohle explains:
“the grace conferred is not derived from the merits of either the minister or the recipient (ex opere operantis), though both the free action of the former and the moral preparation of the latter (if he be an adult) are required for the validity and worthy reception of the sacrament.”[viii]
That said, Trent declares the recipient of a valid sacrament must be well-disposed to receive the graces contained therein:

“To emphasize the last mentioned requisite, the Council adds that the Sacraments ‘confer grace on those who do not place an obstacle thereunto,”[ix]

And further down the same page, Msgr. Pohle explains:

“the Sacrament is frustrated in its effects if the subject ‘places an obstacle’ (obex gratiae) by not having the right disposition.”[x]
In discussing this matter of the effect of the reception of sacraments according to the dispositions of the subject, a seminary professor’s manual explains such reception can be valid, null, profitable, unprofitable, or sacrilegious.[xi]
Regarding the “unprofitable” reception of sacraments, the professor explains:
“the sacrament is valid, but does not produce grace [in the subject] oweing to the absence of the requisite dispositions on the part of the subject.”[xii]
And regarding “sacrilegious” reception of the sacraments:
“if one receives a sacrament knowing he has not the requisite dispositions.  A sacrilegious sacrament is always without profit.”
The salient point being that in such instances, the subject has not failed to profit from the sacraments because there was no grace produced ex opere operato (per Trent), but because he has placed an obex over his soul which has blocked the efficacious transmission of it.
Conclusion:
If, therefore, we return to Fr. Pulvermacher’s contention that the new Mass is not “grace-giving,” we are forced to admit that he has directly opposed (unwittingly, to be sure) a de fide Canon of Trent in supposing there could be such a thing as sterile sacraments.  Neither does his example of “Black Masses” gain him any headway as an alleged example to the contrary, for as was just shown, every sacrament produces grace ex opere operato, but that such grace is not effacacious in the souls of those who would receive such sacrilegous Communions is not because the grace is not contained in the sacrament, but because the dispositions of the subjects (ex opere operantis), being sacrilegous, are not disposed to receive the sacrament rightly, and therefore present an obex gratiae to the transmission of the grace contained in the sacrament.